September is a yo-yo; September branches out, roots digging deep and wide for life, for a chance, for stability, to raise itself upright.

September is worldly, a traveling rogue and a fond friend, the long-faced journeyer back after years in the cold, a horseman ready at last to dismount.

September is loud and fast, a clock-racing hellion on a last-call weekend bender. It wants urgency, but doesn’t need it. September is a curly-haired goofball, a wedding reception dancing machine, never asked to leave, but always watched with a wary displeasure.

September is the open highway, a dotted-line mentor free and kinetic, always a half-step short of an answer it’s learned how to do without.

September has a broken-knuckled swagger, a brawler made of dynamite, swinging wildly in a crowd, unprovoked and furious. September is a waterfall, suspended beauty and rock-crunching force.

September is the Institute for the Betterment of Summer’s Weary.

September is an entrepreneur, a wide-eyed genius, a gizmo inventor entranced by subtlety and dream-driven to new heights.

September is intergalactic, a cosmic philosopher, a MacGyver for the digital age, poised to conquer the inconsequential with uncompromising flair. September is space, at a dreamer’s pace.

I drove through a moonscape battlefield, fast approaching with a party just over the horizon. I drove down a canyon and up a hill-perched ghost town. I drove up and over and across, a perpetually content horizon chaser.

September is seeds flung away, a last-chance effort, trying to find solid ground.

September asks for sunsets, delivered sparingly against mountain backdrops of bruised oranges dancing in the pale blue of a late evening.

September was never meant to last, time passing unbidden, through waking hours unbroken by sleep, a misery lost in the rain. September is circular, brightly painted memories of a love that couldn’t last, with an element of danger hidden just out of reach. 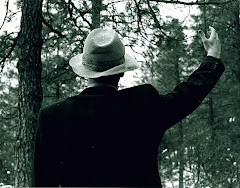